What does this mean, you may ask? Well, “BeReal” is a new “anti-social media” social media platform that has recently gained popularity amongst college kids. The app sends all users a daily alert at different times each day that it’s “time to BeReal!” In other words, it’s time for users to take a photo of what they’re doing as well as an accompanying selfie. Both photos are posted to their feed and in order to scroll through other friends’ feeds, you have to post within 2 minutes of receiving the “BeReal” notification. Like most forms of social media, the app includes a friend feed, a discovery page, location sharing, and comment sections. It also includes “realmoji” reactions and a personal memories section. 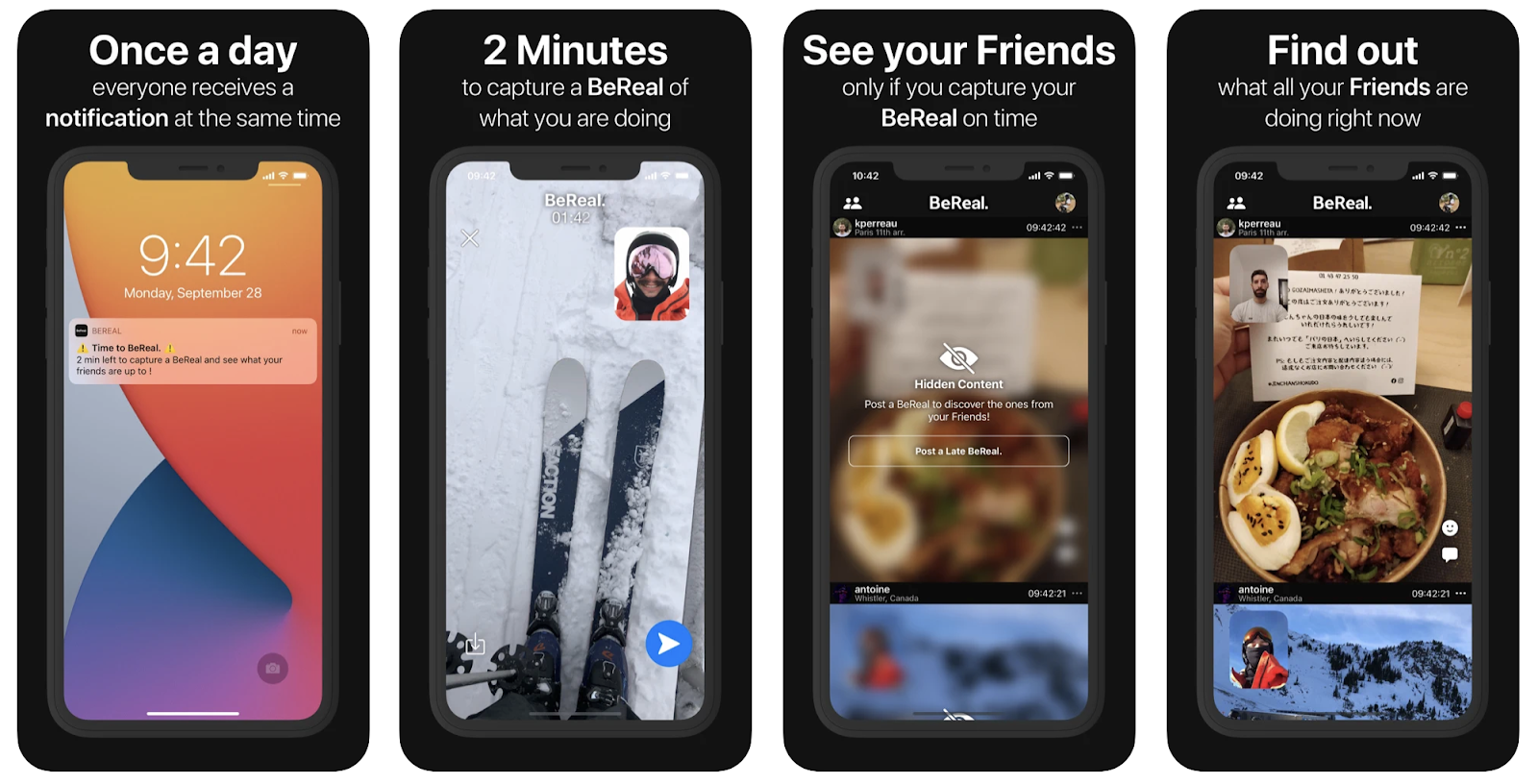 I hadn’t heard about this app until a few weeks ago when I listened to a presentation given by Vanderbilt “BeReal” brand ambassadors. The utter irony throughout the whole presentation was astounding to me.

The above screenshot epitomizes this irony. BeReal markets itself as “not another social network” yet is ranked #16 in Social Networking. Perplexing. 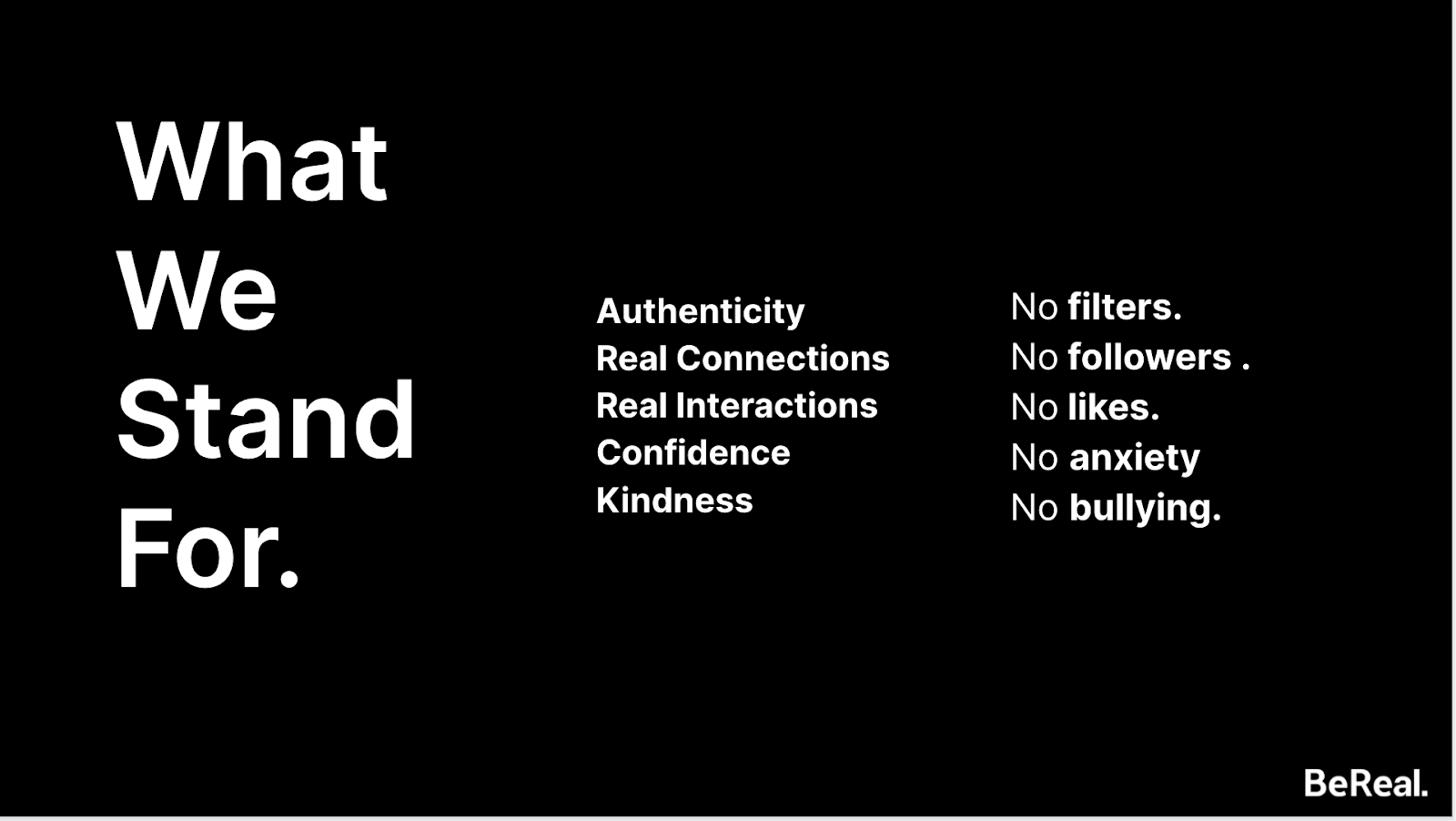 “BeReal” separates itself from other social media platforms by branding itself as an un-curated, wholesome, genuine way to virtually share and connect. In the presentation, I learned that “BeReal” apparently stands for: “authenticity, real connection, real interactions, confidence, and kindness.” Now, I’m not saying that these aren’t great pillars. They are. But the app is not doing anything to genuinely promote these things. If the creators of the app wanted people to be authentic, confident, and kind while creating real connections and real interactions, they wouldn’t create yet another social media app.

According to a 2019 survey by Common Sense Media, teenagers and children spend between five to seven and a half hours a day on social media. Social media has a multitude of negative effects on teens, a few being: it is a major distraction, it can disrupt sleep (which in turn has immense physical and mental consequences) it exposes people to bullying and rumor-spreading, and it creates unrealistic, unachievable views of other people’s lives and one’s own life (which leads to overall dissatisfaction.) Additionally, social media is linked to causing anxiety, depression, and other well-being issues. Even the creators of BeReal acknowledge the dangers of social media: 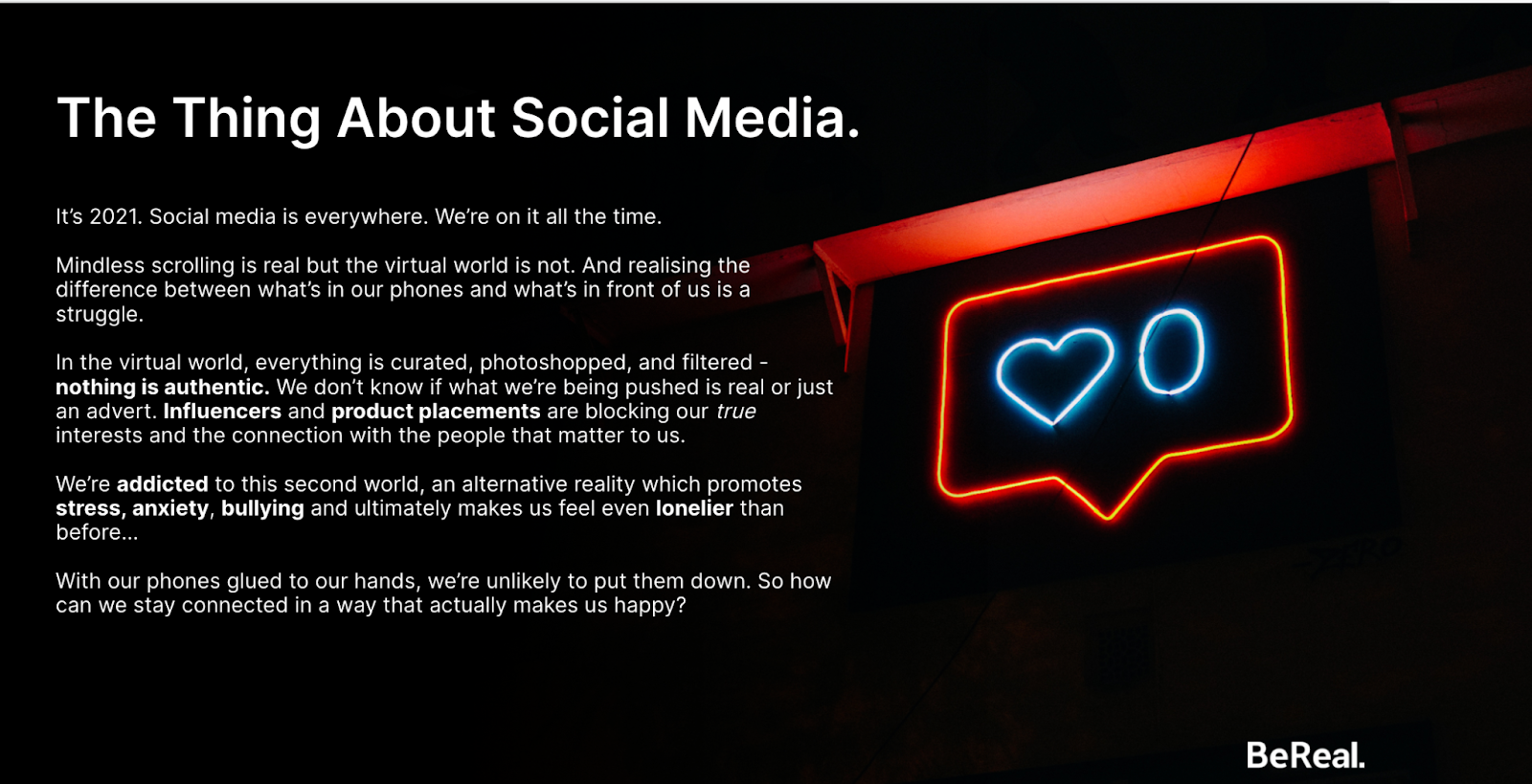 Do teenagers really need yet another social media platform? Even if that platform is supposedly intending to do good? This app is not going to help teenagers put their phones down and enjoy their real lives.

Further, with a slogan like: “Your friends. For real.”, the app totally negates human-to-human interaction and instead places the value on having digital, virtual, online friends.

As much of an avid BeReal hater as I am, I will say that some of their goals are perfectly decent. It’s respectable to want to create an app that is less filtered than the typical social media platforms. Showing off an un-curated life and viewing others’ day-to-day life rather than their highlight reels sounds like a good idea.

Where I see the problem is simply that the answer to the issues created by filtered, curated social media is not another social media app. Instead, I think the solution is a movement away from promoting “real life” as one that solely exists online. BeReal’s acknowledgment that the filtered nature of typical social media is harmful is an important step towards ameliorating some of the issues relating to social media. However, in order to further limit the damaging effect of social media on teenagers, additional steps are necessary. These steps could potentially occur at national, individual-platform, or personal levels.

In terms of change at a national level, although, it is difficult to regulate privately-owned social media companies, the government still has a say. For instance, Facebook whistleblower, Frances Haugen, testified before a Senate subcommittee about how harmful Facebook is, particularly on teenage girls. Haugen’s plea for lawmakers to examine Facebook’s algorithms is an example of potential social media policy at the national level. “Other legislative responses could include passing a national privacy law and strengthening safeguards for children online, two measures that have been long-debated among Washington lawmakers” (Allyn 2021).

As for platforms themselves, social media companies have the choice to make change. For instance, in September of 2021, TikTok announced new resources to “support [the] community’s well-being.” Some of these features include general well-being resources, an expanded guide on eating disorders, the promotion of local support resources, and warning labels for sensitive content. Additionally, media platforms could work towards advising people to limit their time spent on social media. iPhone has a feature in settings that allows you to set a screen limit time for specific apps. Perhaps, individual social media platforms can work towards something similar?

In terms of this particular issue, I believe that the greatest potential for change comes on a personal level. Using social media is a decision. We can make the decision to use it in a way that ends up being harmful, to not use it at all, or (what’s best in my personal opinion,) to use it in a healthy, beneficial way. Individual parents and teachers play a role in teaching children about the potential drawbacks of using social media so that kids can learn how to use social media in a positive way.

When the next “BeReal” notification pops up on your phone, you may want to think twice before stopping what you are doing in real life to take a photo.

6 thoughts on “On Being Real”